Group tours of Thespian Hall are available by appointment only. Contact the Friends’ office or email fohboonville@gmail.com to make an appointment.  Cost is $5.00 per person. 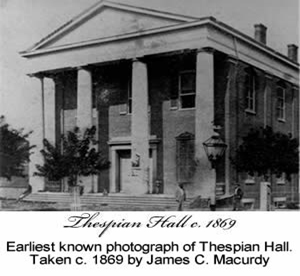 For more than 160 years Thespian Hall has captured the vision, the imagination and the essence of the community in which it was built.

The roots of Thespian Hall go back to 1838, when a remarkable thing happened in the frontier town of Boonville. That year, sixty leading citizens founded an all-male dramatic group called “The Thespian Society”, which enjoyed wide community support that was unique in its day.

By 1855, the Thespians were ready to build a permanent struction as “. . . a monument to the liberality and good taste of our citizens…”. It took two years to complete the four story high Greek revival building. The Odd Fellows, Masons and City government occupied the second floor with its 18 foot ceiling. The Thespians, incorporated now as the Boonville Library, Reading Room and Thespian Society used this first floor for their productions and the basement as their reading room. Thespian Hall opened July 3rd, 1857, with a grand ball, with dedication ceremonies held on Independence Day. Boonville’s home for the arts began its long life as catalyst for community involvement and civic pride.

During the Civil war, Thespian Hall filled many needs, from quartering the Federal Troops to serving as a hospital for soldiers. The unity created by Thespian Society began to disintegrate and sometime during the War, the Society ceased to exist. The Hall’s ownership was transferred to J.L. Stephens, once a Society member, and Boonville became known as the “best little theatre town in Missouri” as well-known performers from Eddie Foy to black pianist “Blind”  Boone played the Hall. The Turn and Gesang Verein, one of the athletic and singing societies which flourished in the areas of heavy German settlement, was a major occupant of the building, sponsoring many of these events.  By 1898, Thespian Hall had lost much of its charm and and some debated “removing this historic building … ”. Owners Lon Vest Stephens (Governor of Missouri, 1897-1901) and his brother W. Speed Stephens decided to renovate the hall instead and, in 1901, opened it as the Stephens Opera House with a stage house added at the rear of the building. The main floor had been slanted, cutting into the former reading room, and an orchestra pit, box seats and curved balcony completed the modernization. A new era began, with Boonville as a stopping point for many major touring companies, only to end in 1912, when the nickelodeon began the hall’s transition to movie house.

The second and most serious threat to building occurred in 1937 when Fox Mid-West Theaters, owners of the building, announced plans to tear down Thespian Hall and replace it with a “modern movie palace.” Concerned local citizens, led by historian Charles van Ravenswaay, called a public meeting and formed the Thespian Hall Preservation Committee. This group mounted a state wide preservation effort, one of the first of its kind in Missouri. This well-orchestrated campaign saved Thespian Hall and for the next 38 years, it continued as a movie theater.  In 1975, the Friends of Historic Boonville acquired the theater as a gift from the Kemper Foundation of Kansas City. With the help of the Foundation and the community, the Friends have worked to restore the building, making Thespian Hall once again a home for the arts.

The Hall, oldest theater still in use west of the Alleghenies, was placed on the National Register of Historic Places in 1969. Because of the vision and the hard work of the Friends, not unlike the Thespian Society which built it, Thespian Hall is a historic building still making history.